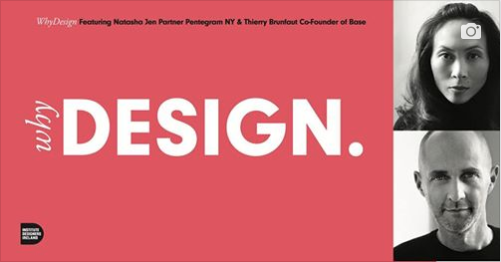 Join us on Friday evening on March 8th, International Women’s Day, when we will hear from Natasha Jen, Partner in Pentagram New York and Thierry Brunfaut, Co-Founder of Base Design

Both internationally acclaimed designers will speak at the event, giving us insights into their careers and why balanced teams make better teams.

Following the inspirational talks, we will continue the conversation with a panel discussion on #BalanceForBetter.

Ticket prices start at €17 and all attendees will have FREE access to Number 22 night club.

WhyDesign events are aimed at practicing female and male creatives that want to build a more inclusive and successful Irish creative sector.

www.whydesign.ie is aimed at second level female students, their parents and guidance councilors. In hope of building a more balanced, productive creative sector. We showcase inspiring role models who share their journey and insights into the industry. A national overview of the third level creative courses are featured on the platform, the first initiative of its kind in Ireland.

Natasha Jen is an award-winning designer, an educator, and a partner at Pentagram. Born in Taipei, Taiwan, she joined Pentagram’s New York office in 2012.

She has earned awards from every major design competition and has been profiled in publications including Wired, Fast Company, 99U, It’s Nice That, Wallpaper, Monocle, Kinfolk Magazine, Print Magazine and Creative Review. She was a winner of Art Directors Club’s Young Guns 4 and also served as a judge for the competition in 2007, 2011, and 2017. In 2014, Wired Magazine named her as one of nine “Designers Who Matter.”

She has served as Board of Directors of the New York Chapter of the American Institute of Graphic Arts (AIGA) from 2014 to 2017. She also serves on the board of Storefront for Art and Architecture in New York. She is a faculty member at the School of Visual Arts BFA Graphic Design Program and is a guest critic at Harvard Graduate School of Design, Yale University School of Art, Cooper Union, Rhode Island School of Design, and Maryland Institute College of Art.

Coming from a family of architects, Thierry brings to Base creativity grounded in common sense. Following a two-year stint as a graphic designer in Spain, Thierry co-founded Base in 1996 with his friends Juliette Cavenaile, Dimitri Jeurissen, Marc Panero, and Geoff Cook. Though leading BaseBrussels, Thierry today oversees all important strategic and conceptual issues within Base, and is in constant contact with the studios in New York and Geneva.

To projects ranging from visual identities to ad campaigns, Thierry imparts a philosophy of graphic and conceptual simplicity that emphasizes concise communication. Thierry believes in the power of creative autonomy mixed with teamwork and pleasure. Thierry has led landmark Base projects including MoMA QNS, Maison Michel, San Francisco Art Institute, Mobistar, BeTV, Bozar, Hotel Missoni, The Olympic Museum and La Monnaie Opera and is the author the “5-minute poster series”, creating 50 typographic works, each dedicated to a short bit of wisdom on design. Today, Thierry is also professor at La Cambre’s Visual Communication and Design departments, and lectures about design and branding around the world, with his “Brands are like people” talk, among many other.